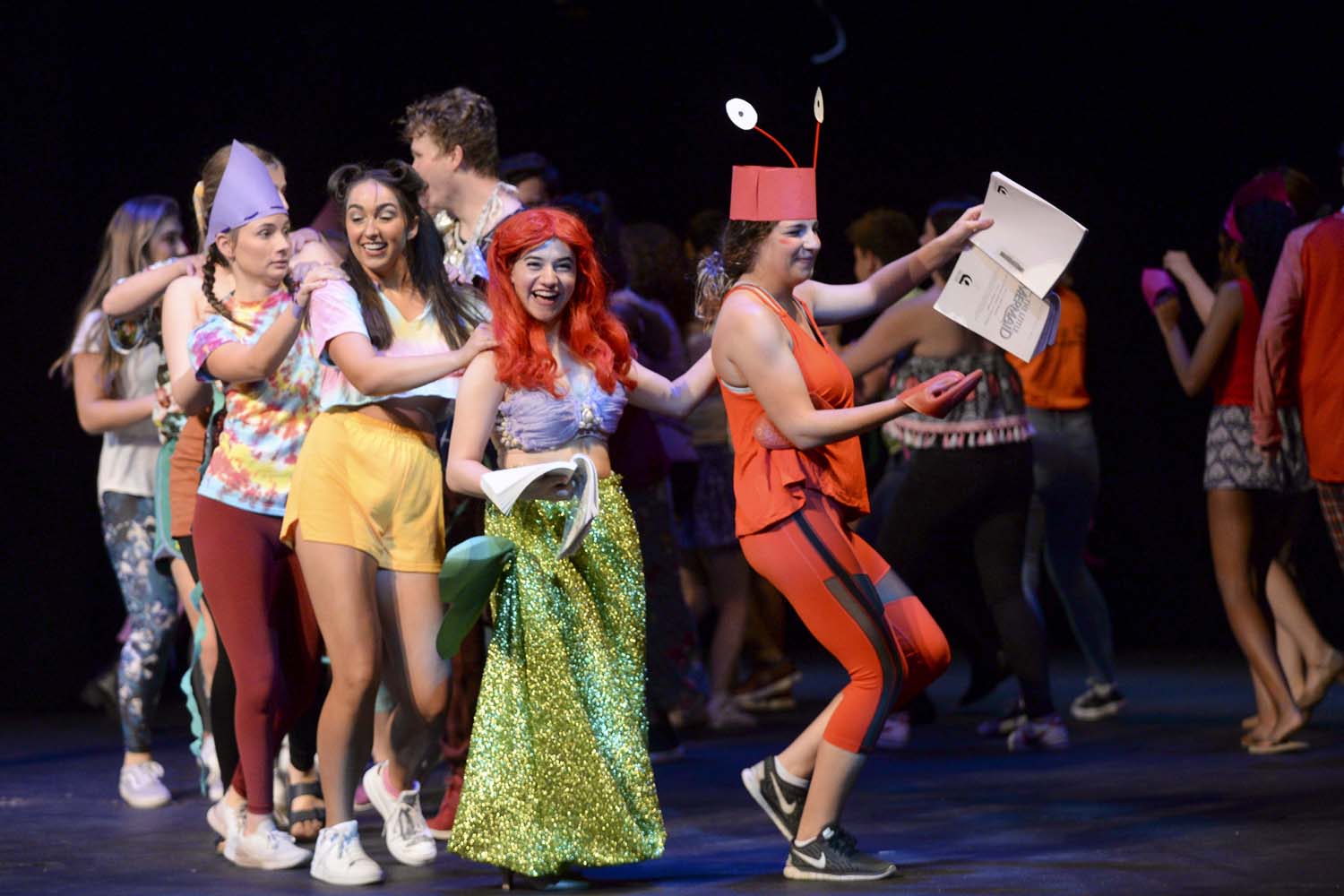 As the lights dimmed, the melodies of “Part of Your World” and “Under the Sea” filled the theater and the audience cheered enthusiastically. Ariel, played by Heather Royer, took her place center stage, and the crowd laughed as she danced like a caricature of a Disney princess.

This excitement resulted from a production of Disney’s “The Little Mermaid” hosted by Pitt’s Musical Theater Club (MTC) at the Stephen Foster Memorial Theater last Saturday. The club hosts an annual 24-hour musical, and this year’s production gives a comedic take on the Disney classic.

The production was a collaboration between Pitt’s musical theater groups – including Pitt Performance Collaborative, MTC, Redeye Theater Project and the United States Institute of Theater Technology. With just 24 hours to pitch, direct, choreograph and design a set for the full two and a half hour production, the cast and crew set out to create a hilarious and flawed musical.

Many sets and props were assembled from household objects and construction paper, while costumes were mostly clothes the actors already owned. Juliana Pillets, a communications major and president of MTC, said she was proud of the work they were able to put together in just 24 hours.

“It was hard to create an ocean and land in 24 hours with just construction paper, like we didn’t spend money on all of this,” Pillets said. “So Ursula’s tentacles were made out of trash bags…it was about being creative to overcome those obstacles.”

In the opening scene of the show, Ariel saw Prince Eric, played by Josh Wiener, sailed in a boat constructed from a piece of brown construction paper labeled “Boaty McBoatFace”. Royer’s portrayal of the classic, clueless Disney princess had audiences laughing as she called an oversized foil fork a dinglehopper.

Dustin Butoryak’s direction, which was done on a tight schedule, allowed the actors to put a comedic edge to their roles. Whenever Triton, played by Luke Shaffer, was upset over the loss of Ariel, two of his guards sensually massaged him until he chased them away. Meanwhile, Sebastian’s famous Jamaican accent has been replaced with a Fran Drescher imitation.

The audience roared with laughter whenever Flounder tried to flirt with Ariel, despite his oblivious attitude towards her advances. These moments, spontaneous or directed, make the public laugh. The production even featured pop culture references with dances like the spinning, hitting the whoa, and the TikTok “Why are you so obsessed with me” dance.

Vaishnavi Guddeti, a young neuroscience student, felt that references like these dances – which became memes and viral videos due to their weird styles and fun background – added an unexpected element to the show.

“I really liked the pop culture references like when Sebastian dabbed,” Guddeti said. “Including them in this play made it more enjoyable for college audiences.”

Although the acting overall was not as clean as a traditional production, it matched the expectations of a show that was put together in 24 hours. Despite the quick turnaround, the production featured a talented cast of minor characters and protagonists.

Ursula, performed by Kayla Bradley stole the show with her powerful voice and sultry attitude. She played the dark and humorous side of Ursula in her song “I Want the Good Times Back”. Bradley also took the liberty of sprinkling in some comedic moments herself. After her death in the final scene, she continued to sing on the floor while the rest of the cast serenaded newlyweds Ariel and Eric.

Even minor characters like Scuttle, Ariel’s sisters, and Eric’s palace chef all had their star moments. The actors parodied these classic roles, delving into the comic essence of the catty sisters or the ostentatious French chef.

In one scene, as the chef goes through a list of his favorite seafood dishes, the audience couldn’t hold back their laughter at his ridiculous French accent. When Ariel’s sisters were hanging out in their “girl cave,” they were the classic caricature of bratty siblings fighting for Triton’s attention. It’s moments like these that Ashley Bufano, a young natural science student, enjoyed the show the most.

“I think the cast did an incredible job of making sure the audience had a good time while they were still having a good time,” Bufano said. “And it’s crazy that they put it in 24 hours.”

Pillets said it was a lot of pressure for the cast and crew, but she also confessed how much fun the organization had with the 24 Hour production. When the ensemble or a main character missed a line or a note, the performers simply laughed it off – and the audience did with them.

“The takeaway from a live theater like this is that you can’t control the situation you’re in, you can only control how you react to it,” said Spikes. “And sometimes the best you can do is just laugh and have a good time.”

2019-09-09
Previous Post: Atlanta Theater Club Soars With Captivating Solo Show “Grounded”
Next Post: The Height of the Storm begins on Broadway at the Manhattan Theater Club