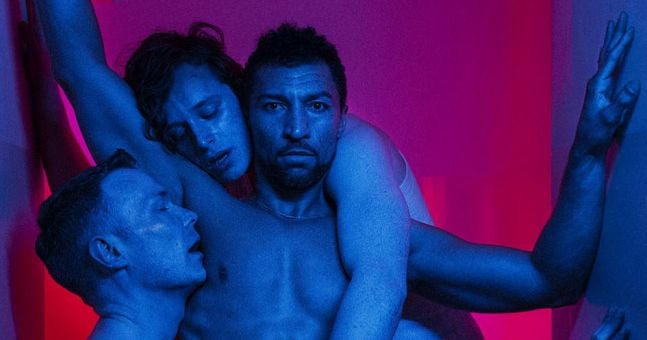 Party Scene is a provocative new show from Philip Connaughton and Phillip McMahon that re-examines the underworld of queer culture.

The production group THISISPOPBABY has curated an unwavering and provocative new play, party scene. The dance-theatre performance will delve into the bowels of queer culture to explore themes of desire, intimacy, isolation and dependency.

party scene will have its world premiere this summer at the Cork Midsummer Festival (June 15-17) and Dublin’s Project Arts Center (June 22-July 2).

The new production is a collaboration between choreographer Philip Connaughton and writer/director Phillip McMahon with a company of four incredible performers. It celebrates the sweat of a club session – while asking tough questions about drugs, sex, consent and mental health in the queer community.

By discussing chemsex through an objective lens, the show aims to spark a conversation about identity, self-esteem, isolation, homophobia, family, and caregiving.

Part urgent gathering, part explosive event, party scene will immerse the audience in its frenetic sub-cultural world. This raises questions: when does an underground scene become a community crisis, and when is it time for the party to end?

THISISPOPBABY is a theater and events production company that reinvents the space between popular culture, counterculture, queer culture and high art. It provides both a vehicle for the dreams of its associated artists and an electrifying access point to the arts.

Over the past 12 years the company has performed to over 250,000 people in Ireland, the UK, Australia, America and mainland Europe. Its star productions have won seven major awards, with nominations for dozens more.

This show contains strong language and nudity. Recommended for ages 14 and up.

📢 ANNOUNCES our second show of the year,
the world premiere of PARTY SCENE: Chemsex, community and crisis💥

A new, large-scale ensemble spectacle – a glorious celebration of ritual, connection and the power of community. A radical piece of interdisciplinary theater that falls somewhere between a party and a purge.

Following the success of Not a Funny Word (2018), Haunted is a new play by actor, writer and comedian Tara Flynn. Exploring grief and loss with Tara’s signature style, Haunted with and Heart promises to take audiences on an incredible journey.