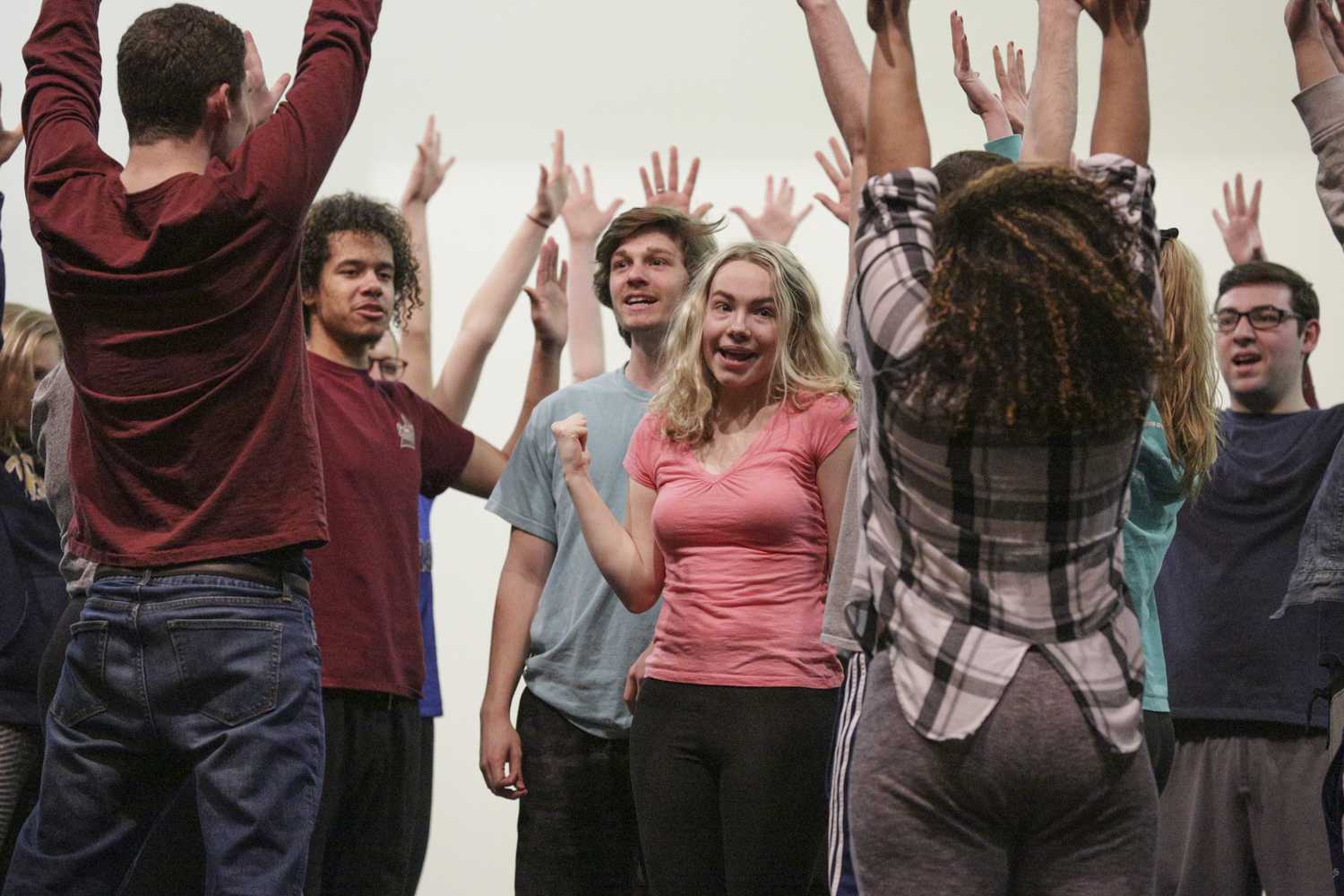 Chloe Torrence circled a group of actors and singers on stage at the Charity Randall Theatre, kicking off her usual weekday routine.

“From tonight you can’t call ‘line’ anymore,” Torrence said. “We’re starting technical rehearsals soon, so you should know your lines by now.”

The junior theater arts and music major then began warming up for the group. They danced and stretched to Rihanna’s ‘We Found Love’ and shared how they felt about rehearsal that night. Most of the performers were exhausted from the week of rehearsals and ready to go home, while others were excited and motivated.

The band kicked off one of its final rehearsals a week ago for the Musical Theater Club’s production of “Legally Blonde” – opening Thursday at 8 p.m. at the Charity Randall Theater under the direction of Torrence.

Torrence took on the responsibility of directing a Musical Theater Club production after directing other Pitt productions, such as “Roustabout: The Great Circus Train Wreck!” MTC shows receive little to no support from Pitt’s Theater Arts Department and are funded by donations from the production’s audience and arts advocates. The club does not even charge for the tickets.

“With MTC, we don’t have faculty help. So not only do I direct rehearsals, I help do all the blocking and all the character work, I also help build all the sets,” Torrence said.

Torrence and Brooke Stearns, voice director of the show and sophomore in communications and theater arts, worked together to make the challenge of building sets a little easier.

“We took bits and pieces from other shows that they would have thrown away anyway and made them useful for us,” Torrence said. “The cast was also a big help. They’re here for four hours every night, and some of them stay up late to help set up the sets.

Stearns said the vocal production of “Legally Blonde” was one of the biggest challenges she took on at Pitt, but she enjoyed the process of seeing the entire show come together after rehearsals began in February.

“Everyone in the cast is very enthusiastic, and they’ve been great working with them, but it’s been hard to get the voice of a cast of 40 to be consistent,” Stearns said. “After rehearsing six days a week, I think we’ve got it all together.”

Although Torrence and Stearns have taken on great responsibilities, they are far from alone in their endeavors to put on a good show with the cast. There are additional directors, a choreographer, an assistant choreographer, a state director, and designers – all student positions.

“Emily is a hard worker and an incredible performer,” Stearns said. “She and our Emmett work great together both on stage and vocally.”

Cooper trades in her wired glasses for a pair of strappy pink high-heeled shoes as she heads to the stage to play the iconic Elle Woods. The young actress is no stranger to the stage having starred in several Pitt productions, such as the Pitt Stages shows “Parade” and “Little Shop of Horrors.” She also graduated in 2015 from the Pittsburgh Creative and Performing Arts School as a musical theater major.

Despite his stage experience, Cooper had reservations about taking on the lead role and appearing in every scene on “Legally Blonde.”

“I did a lot of work preparing this character. Playing someone so different from me was challenging but also fun,” Cooper said.

She approached Elle Woods’ massive personality by creating a character story about Elle’s life growing up and looking through the script text for implications on her personality. Self-identifying as a “theater nerd,” Cooper found unlikely parallels between herself and the pink-loving fashionista.

“The thing I’ve always bonded most with Elle is that she leads with kindness, always, no matter what she’s doing,” she said. “Elle Woods is a better person than all of us – she spreads so much love, positivity, strength and determination. Why wouldn’t you want to live every day like this girl?

Cooper felt it was important to bring some of his own quirkiness into his portrayal of Elle Woods, a character who is often stereotyped as a materialistic, dimwitted sorority girl.

“It was really a shock when I found out I was going to play Elle. I immediately thought, ‘OK, how am I going to rectify that I am who I am and this character is who she is'”, Cooper said.

Her approach to this juxtaposition of characters was to set aside typical views of Elle and bring a more realistic person on stage, one with hints of Cooper herself scattered throughout the character arc of Elle.

“She’s a human being. You can’t play someone based on the stereotypes around her,” Cooper said. sometimes she’ll have to be a little clumsy.”

As the Pitt Orchestra repeats the notes of “Whipped Into Shape” with the singers on stage, more and more pink appears on the sets. Most of Cooper’s costumes feature the show’s signature color, but MTC’s take on this show doesn’t focus on bright, girly costumes.

Cooper said the thing she appreciates the most about starring in an all-student-run show is the freedom the cast and crew have to insert their own style and messages. MTC has made the story its own by humanizing the characters – showing the entertaining but also meaningful sides of Elle Woods and her Delta Nus.

“This show has become so much more than just sorority girls singing,” Cooper said. “It’s pink and fluffy and happy – but it’s also important, and you can be all of those things.”