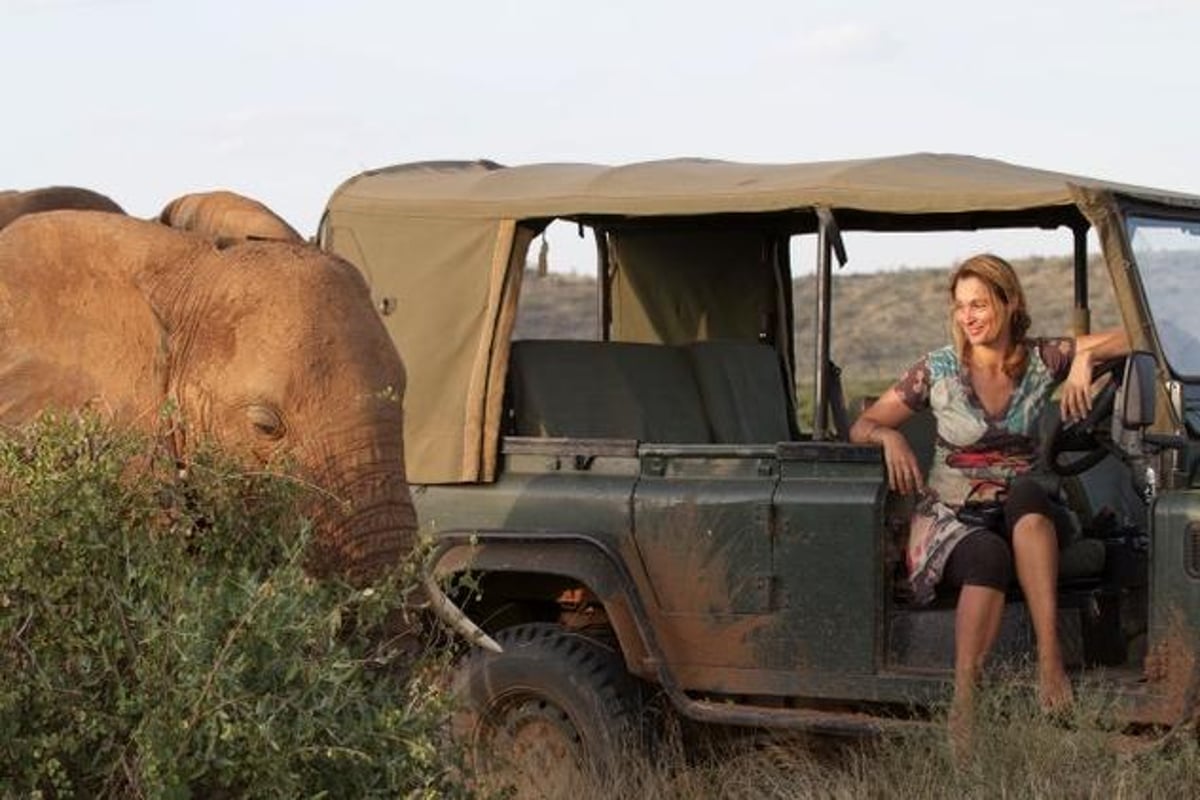 The ecologist and filmmaker survived the bite of a deadly snake, she saw people “mutilated by hyenas and lions, chewed up by crocodiles and gored by elephants”.

But that never put her off. Animals and Africa are in his blood.

She was born and raised in East Africa – one of two daughters of respected zoologist Iain Douglas-Hamilton, who began researching elephants in the 1960s and founded the Save the Elephants charity in 1993, and his Kenyan-born wife, Oria, an author.

Her first name, Saba, means “seven” in the Swahili language, a name given by Maasai women because she was born on June 7 at 7 p.m. and was a seventh grandchild.

She is of Scottish aristocracy, great-granddaughter of the 13th Duke of Hamilton, Alfred Douglas-Hamilton, and a distant cousin of the current Duke, Alexander Douglas-Hamilton, who among his titles is Hereditary Keeper of the Palace of Holyroodhouse and bearer of the Crown of Scotland.

His encounter with a carpet viper – a highly venomous species responsible for more human deaths from snakebites than all other African snakes combined – occurred during an expedition to a remote desert region in northern Kenya. when she was a teenager.

“Someone yelled ‘snake’ but in a second it bit me on the heel,” she said.

Saba Douglas-Hamilton kicks off a national UK tour this week with her show In the Footsteps of Elephants, which will culminate in three Scottish performances next month. Photo: Patrick Evans

“I felt his teeth go into my foot, then I felt the ‘fire’. That meant action stations.

The Scot leads the fight to protect wildlife in Malaysia

The trek team jumped to his aid, holding his foot inside their jeep’s engine to administer electric battery shocks – a technique believed to affect the ions in the snake’s venom and make it less toxic.

Then they bandaged his leg up to the thigh in an attempt to slow the spread of the poison.

Saba Douglas-Hamilton, conservationist and filmmaker, was born and raised in Africa and has spent her life protecting elephant populations. Photo: Rowan Musgrave

“It was like lava was rising on my leg and they electrocuted me for two hours,” she said.

“I was in so much pain that I had to focus every fiber of my being to remind myself to breathe.

“I couldn’t move so I just locked my eyes on the moon.”

An SoS message was sent to his father the next day and flying medics were dispatched to evacuate him to hospital.

“I passed out on the plane,” she said.

“I turned blue and thought I might not live.

“But on the third day, I woke up and the sun was pouring through the window like liquid gold.

Now audiences in Scotland and across the UK will have the chance to hear first-hand about his adventurous life and work to protect endangered African elephants in a new show which debuts this week. .

What is perhaps less well known is that these long memories – and life skills – are learned primarily from their mothers and grandmothers.

Knowledge and behavior are passed on to young animals by herd matriarchs – from locating the best food and water supplies to navigating migration routes, recognizing danger and learning to protect each other. .

Douglas-Hamilton, a graduate of the University of St Andrews, knows all this both from personal experience and from her father’s pioneering research.

But African elephants now face an increasing number of challenges in the fight for survival.

Latest estimates suggest there are only around 415,000 left on the continent, with climate change, spreading human development, changing land use and the international ivory trade being responsible for the their disappearance.

Douglas-Hamilton, who runs a high-end safari business in Kenya’s Samburu National Park with her husband Frank Pope, chief executive of Save the Elephants, explains how people have been affected over the years as the desire to ivory has risen and fallen.

By the time the ban on international trade was established in 1989, the continent had lost around half of its elephants.

The numbers began to rebound over the next two decades, but growing demand from the East triggered new surges in demand for tusks in recent years.

Encouragingly, the situation has improved – thanks to conservation efforts and actions to eradicate wildlife crime.

But Douglas-Hamilton warns that careful planning is needed as human populations increase and development spreads to avoid conflicts between populations and elephant herds.

“The next big issue is competition,” she said.

“Wild areas are carved out with roads, railways, buildings.

“It causes a loss of habitat and connectivity.

“Some elephants follow the routes taken by their grandmothers, but facing a confusing new landscape can lead to conflict, with the animals displaying aggressive behavior.

Her show is an inspiring and heartwarming look at her family’s efforts to protect giant mammals, with stories describing the lives of endangered herds and the work done to combat poaching, indiscriminate killing and trafficking.

It will feature tales of everything from the courage and commitment of local Samburu warriors who regularly risk their lives fighting off poachers and caring for sick and injured animals to the antics of lifelong elephant “friends”.

“A decade ago, elephants across Africa faced catastrophic declines due to poaching for their ivory,” Douglas-Hamilton said.

“Thanks to a global coalition of scientists, activists, organizations and nations, the ivory trade is now in decline and poaching no longer threatens any major elephant populations.

“This is rare and good news for the planet.

“I’m thrilled to be able to bring it to life – and discuss the challenge of forging a harmonious coexistence between elephants and humans.”

In the footsteps of elephants begins on Tuesday in Bury St Edmunds and concludes with three Scottish appearances – in Aberdeen, Stirling and Inverness – in October.