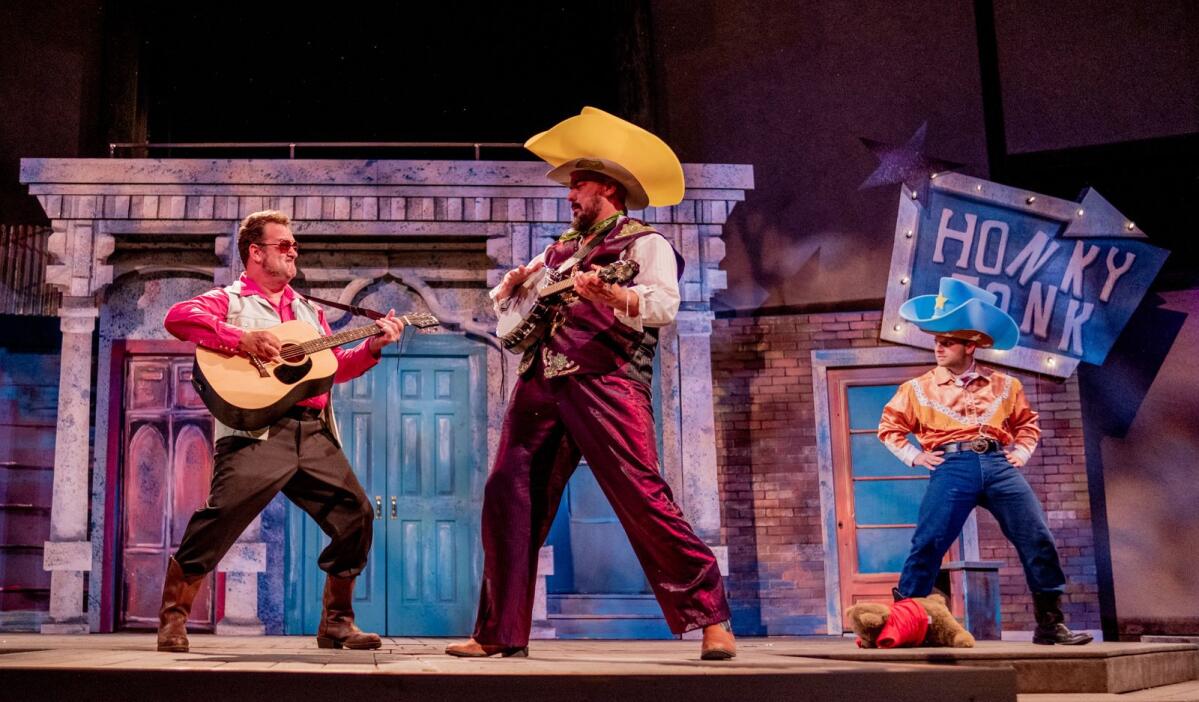 Shakespeare’s crazy antics fried south of the Riverside Theater include a string dueling moment by (left to right) Tad Paulson and Patrick Du Laney, punctuated by the hip swivels of Elijah Jones in “The Comedy of Errors”. This touch of Nashville shakes, rattles and rolls on the festival stage in Lower Town Iowa City Park through Sunday, August 22, 2021. (S. Benjamin Farrar)

IOWA CITY — Watching “The Comedy of Errors” is like watching a Saturday morning cartoon.

At the hands of the elite cast of the Riverside Theater and the brilliant guidance of director Angie Toomsen, a funny thing happened on the way to Ephesus in this free production of Shakespeare. It will thrill the woods of the festival stage through August 22, 2021, in Iowa City’s Lower Town Park.

If you think Shakespeare is stuffy, think again. Toomsen and company took the language to new heights, ripping the story of the Bard’s Elizabethan-era misidentity and spinning it around late ’60s and early ’70s Nashville.

You’re going down now, you hear? It’s the funniest free-for-all you’ve ever seen, full of happy tunes, looney toons and lots of nods to Yosemite Sam, Wile E. Coyote, Elmer Fudd, a bunch of daffy ducks and more than one Pepe Le Pew in female form – all with plenty of Foghorn Leghorn legs.

When was the last time you saw boot-scootin’ boogie in a Shakespeare show?

When the cast of “The Comedy of Errors” engage in a country line dance, you know they’re about to rock Shakespeare. The Riverside Theater’s free production brings a riot of laughter to the Festival stage in Iowa City’s Lower City Park through Sunday, August 22, 2021. (S. Benjamin Farrar)

It’s so hilarious that on opening night last Friday, a gentleman sitting near a corner of the stage laughed so much that one of the main actors had to turn his back to the audience to hide his smile and regain his composure. His cohort also struggled not to laugh, in full view of audiences of all ages – just like the good old days when neither Carol Burnett nor Harvey Korman could keep a straight face on TV.

What: Shakespeare in the grounds of the Riverside Theater

All this visual whimsy sustains physical hilarity and Ye Olde World-speak so well that 16th century language is never lost to the 21st century ears that receive it.

Here’s the story: Egeon and Emilia of Syracuse welcomed identical twin sons and named them both Antipholus, as we do. Since this merchant class couple would need servants/companions available to their boys, they purchased identical twins, both named Dromio, and began raising them together.

But alas, during a sea voyage they were shipwrecked, and the family was torn apart. Egeon and one Antipholus and Dromio took up residence in Syracuse, while the others were rescued and taken to the rival Mediterranean city of Ephesus.

When the Syracuse boys turn 18, they decide to go in search of their lost brothers. (I’m sure I wasn’t the only one in the audience thinking “Dromio, Dromio, why is art Dromio?”)

Egeon (Tad Paulson) separately embarks on his own mission to reunite his family, but is stopped when he enters Ephesus, as that city’s borders are closed to Syracusans. He has one day to raise the ransom needed to avoid execution.

Naturally, since Adriana is married to the prosperous Antipholus of Ephesus (Logan Ernstthal), she confuses the Syracusans with her husband and servant, Dromio of Ephesus (Ray Vanek).

And so the comedy of errors is launched.

While everyone on stage is spotless, the fact that Broadway hasn’t reopened means we can marvel at Du Laney’s comedic genius, from knowing wink to frontal physique.

Of course, he plays with a pack of pros. And none of this happens by accident. You don’t become living toons without a ton of improv action refined through repetition.

“The cast had full permission to invent and perform as we created these characters,” Toomsen told The Gazette. “That was definitely the spirit of the rehearsal space. …

“It starts with improvisation and brainstorming and then it’s pretty choreographed,” she noted. “In order to get it right, it breaks down step by step, like a fight choreography.”

Everyone in the cast deserves a separate shoutout, but special nods go to Jones as Syracuse’s Dromio, whose hip pivots are as hilarious as his mood swings; Matthew James, who once again proves he may be the most versatile actor around, completely changing characters and costumes in a flash; Hartsgrove Mooers, as a bewildered wife lost in the confusion of identity crisis; and Vanek, who also gets a lot of laughs as Dromio of Ephesus.

Do yourself a favor and see this fried Southern Shakespeare. It seethes with double, double toil and trouble in a most delicious way.