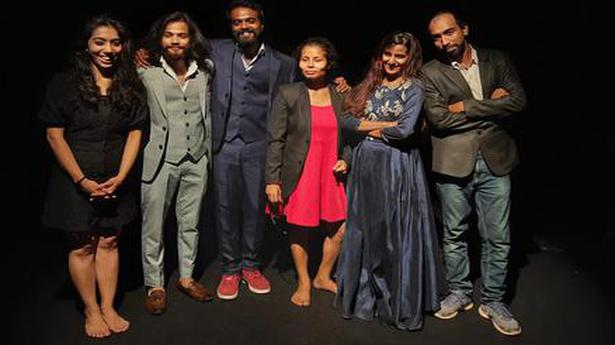 For their individual acting performance project, budding theater artists from Hyderabad University hope to focus on the opportunities rather than the limitations created due to the pandemic

Theater Arts students at Hyderabad University have gone through a unique post-COVID-19 learning curve as they turned their personal experiences into theater productions, a process that culminates in 30 theater performances.

Previous AIPP events were held in a studio. For the first time, the event is being held in a large auditorium (Gurubaksh Singh Hall at Hyderabad University) to follow safety protocols and also to attract more audience.

The project is unique because its creative writing process is based on students writing about their personal experiences. For the project, the group visited five locations – a post office, Kendriya Vidyalaya, a heliport area and the main campus entrance gate on campus and a crossroads with a traffic light near the university – in June. “Professor Noushad asked us to soak up the vibe of the place and write down what we could take from it,” shares Tanu Rawat.

Visiting these post-COVID places brought back memories of their childhood. The aspiring actors sent in a draft of 30 lines and revised them according to the teacher’s comments/suggestions. Although he asked them not to jot down any memories, the students had many memories which they wrote down in the form of poetry, essay, letter to a friend, and even stand-up comedy.

After the second wave lockdown was lifted, AIPP meetups resumed, first in an open space for two hours to practice and later, at the studio for solo rehearsals. “The break during lockdown was frustrating but it helped us connect,” observes Shatrughan Kumar, from Champaran, Bihar. He thinks this connection helped develop empathy and visualization skills. “Being sensitive helps us become a better artist,” he adds. Shatrughan also starred in two plays directed by batch mates in July.

The artists also used their existing skills in Yakshagana, Kalaripayattu and Chhau to enhance their performances. Each piece was designed in different genres; in a movie, physical game, or Brechtian-style format where the fourth wall is broken and the audience is aware of what’s going on.

Hosting 30 plays (six actors doing five plays each), including the introduction and curtain call in three hours, was a challenge. Performances in Hindi, English, Kannada and Bhopali are woven together to allow the actors to move smoothly from one piece to the next. The group was helped behind the scenes by bandmates and juniors. Senthuran Kirubairajah and Prashant from Sri Lanka who are studying drama helped the students in a film performance piece. Having had the chance to perform after a long time, the space feels sacred and important to them. “Everyone is eager to leave, because it’s almost the last days of being a student. We could think about different things – the existential crisis a person is facing or the feeling of emptiness during confinement; it has helped to creative writing,” says Tanu.

With their final semester ending at the end of the month, the students are optimistic. Amid fears of a third wave, live performances have resumed, but the theater arts are still navigating uncertainty. Do these young people apprehend their career in the theater arts? “There is uncertainty. If not for the pandemic, theater opportunities would have been plentiful and readily available in my hometown of Jaipur,” says Tanu who is also a B.Tech graduate but hopes to pursue a career in acting.

Shatrughan is determined to pursue a career in acting. “We are anxious, but we hope to continue training and waiting for opportunities.” Senthuran, who taught theater at the Swami Vipulananda Institute of Aesthetic Studies in Sri Lanka, plans to return to teaching. “I can do theater even as a teacher,” says Senthuran, who has also worked in short films as an actor and director.

The show goes on for these budding artists who hope to work and train in different mediums. Tanu is optimistic, “We could also seek scholarships and grants from universities. There are limits, but opportunities also exist.