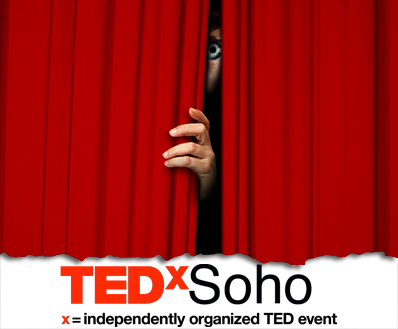 Personalities from film, media, theatre, music, fashion, innovation and technology will speak at TEDxSoho at the Cambridge Theater on May 30

*Coming to London this week*

TEDx makes its very first appearance in Soho on May 30, 2022. The event, created by Sam Orams, who has previously successfully hosted TEDx events in Brighton, will take place at the Cambridge Theatre, WC2H, with tickets on sale now.

Award-winning comedy writer Danny Robins will host the event. Robins recently received critical acclaim for his 2:22 which was nominated for Best New Play at the Olivier Awards. He is the creator of the world’s #1 drama podcast, The Battersea Poltergeist.

TEDxSoho will celebrate people and organizations who dare to dream AND who have the strength, skills and determination to take action, blaze a new trail and make “better” a reality.

Representing the people, work, creativity and culture behind London’s most colorful and infamous borough, home to the UK’s performance, media and creative industries, TEDxSoho will consist of a carefully curated program of short inspiring talks lasting no more than 15 minutes. Ready to feature innovators, leaders, mavericks, creatives and trailblazers, from Soho and beyond, who have chosen to rewrite the rules, throw away the book and aim for a better future.

King of stage and screen, acting legend Michael Sheen will participate virtually via a pre-recorded TED Talk, exclusively for TEDxSoho, on the standardization of the cultural rules of the game. Known for his roles in Oscar-nominated projects such as The Queen and Frost/Nixon, Sheen has also conquered the small screen, most recently in Amazon Prime’s hit TV series Good Omens.

Ray Panthaki is also excited to talk about his background and experiences at the event. Previously a BAFTA Breakthrough Brit, he was recently nominated for Best Supporting Actor at the BIFAs for his performance in the critically acclaimed Boiling Point.

Guests will also be treated to a number of special live performances, including one from BRIT and award-winning Ivor Novello singer-songwriter Tom Odell. Odell’s debut album Long Way Down topped the UK charts and was followed by 3 more top 5 albums. He recently released his new single “Best Day Of My Life” from his 5th album highly anticipated studio set to be released later this year.

In addition to these incredible talents, there will be talks from Variety’s International Editor-in-Chief, Manori Ravindran, while author and computational biologist, autism advocate and 2020 Science Book Award winner Dr. Camilla Pang, will talk about his life and his research. more Former Razorlight guitarist David Ellis will perform exclusive new music at the event.

Karl Lokko, a former gang leader turned activist, poet, lecturer, adventurer and personal adviser to HRH Prince Harry has also been confirmed. Growing up on the gang-inhabited Myatts Field estate, Karl saw his first shooting at the age of 12 and was subsequently shot, stabbed, cut in the face and witnessed the murders of his close friends. It was only through the intervention of a church-run project against youth violence that Karl was able to expose his involvement in a gang and turn his life around.

Professor Katy Shaw is on hand to discuss the leveling of culture in the North. Most recently, she authored Case for Culture: the APPG Northern Culture investigative report on post-covid cultural recovery and is Scholar-in-Residence on the Michael Sheen, Mirror, New Statesman and Joseph Rowntree project, A Writing Chance . Professor Shaw leads research on 21st century writings at Northumbria University.

Paulo De Tarso, founder of Margot and renowned restaurateur, has confirmed his presence with author and journalist Janet Wang who will explain why Chinese wine is not easily found on the menu and how it will soon experience its renaissance.

Finally, Aindrea Emelife, 26-year-old art critic, independent curator, art historian and presenter from London. A revolutionary new voice in an art world otherwise steeped in tradition Aindrea debuted in her first column for the Financial Times at the age of 20, and has been published widely and internationally, including articles in The Guardian, Vanity Fair, The Telegraph, BBC, GQ, Frieze, The Independent, BBC and ArtNet.

If the past two years have taught us anything, it’s that life isn’t a rehearsal. Everywhere you look rapid change is happening and now more than ever we need new thinking, tough decision makers and fast action.

The day will be divided into hour-long sections, interspersed with music and performances and punctuated by regular breaks, providing speakers and delegates with plenty of opportunities to network. TEDx is a global phenomenon, with events happening all over the world. Join us, join the global TED community and help make this event unforgettable.

TEDxSoho will come to the Cambridge Theater on May 30

TEDxSoho will feature 18 inspiring talks and must-see one-day performances on stage, from innovators, mavericks and leaders rewriting the rules for a better future.

Tickets are priced at £75 for standard tickets and £55 for concessions (concession tickets for students, teachers, NHS, emergency services and low-income people. Proof of eligibility may be required on site), including theater reservation fees and catering tax.

Each section will consist of four lectures or performances of a maximum duration of 15 minutes each. There is no time to fuss. If a conference is not to your liking, the next one will follow shortly.

There will be plenty of breaks and networking opportunities for those who want to delve deeper into the topics, meet like-minded people, and maybe even collaborate on their own world-changing project.