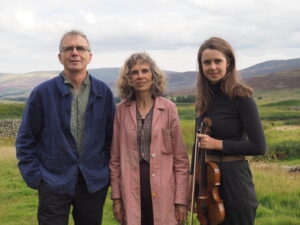 You want to know more ?

Just want to read a number? No problem, you can subscribe for just one week (or more if you wish).

Inspired by real love letters from the early 1900s found hidden more than a century later, Miss Lindsay’s Secret blends music, tales and archives to weave a story of the past and present, of Scotland and the world.

The play, described by Scottish Culture Minister Jenny Gilruth MSP in 2021 as “exceptional and heartbreakingly beautiful”, arrives at the Mull Theater on November 7 and Bunessan Village Hall on November 8.

A museum curator discovers hidden letters linking Glenesk in northeast Scotland to the Klondike Gold Rush in Canada. But should she reveal their intimate and candid details?
It’s a true story of 1900s sewing, secrets and sexting, revealed by three characters on stage – The Curator, The Musician and The Man.

The show features a series of real-life letters, written over a period of 12 years before the outbreak of World War I by Alexander ‘Sandy’ Middleton to Minnie Lindsay, the seamstress he left behind in the village of Glenesk as he went on to make his fortune in the legendary Klondike Gold Rush.

Discovered hidden in a box at the Glenesk Folk Museum more than a century later, the letters are by turns eager and funny, lustful and lonely, frustrated and direct.

Written by and starring actress-singer Maria MacDonell (who heard of the letters as a volunteer at the Glenesk Folk Museum), the show asks timely questions about the morality of sharing secrets from long ago. Do the dead have a voice? Does Miss Lindsay have a choice of
to have his story told?

Co-starring Alan Finlayson and featuring new live music composed and performed by acclaimed young Scottish musician Georgina MacDonell Finlayson, Miss Lindsay’s Secret is a mesmerizing blend of original live music, drama and archival footage that brings back the past. to the present, Scotland to the world .

Maria MacDonell said: ‘These remarkable letters from the Klondike Gold Rush were hidden long ago in the Glenesk Folk Museum, Angus. They are captivating. They say as much about Miss Lindsay’s life in the glen as about that of her Yukon gold digger.

“I created the character of The Curator, along with The Musician and The Man to spin this love story through different threads of time and place, and to explore The Curator’s ambivalence about the public sharing of letters. Haven’t we all read things we shouldn’t have? But do we tell everyone? The piece seems to touch people in so many different ways. It’s a story of stories.