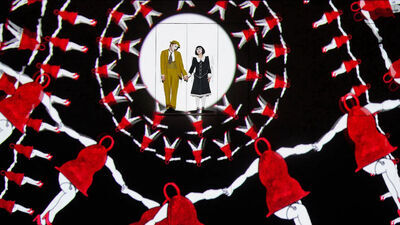 In 1976, Ingmar Bergman directed a film version of the opera, which received four stars from my late husband Roger Ebert, who wrote: “His ‘Magic Flute’ is directed with joyous taste for its fairy-tale adventures , his young lovers and sinister wizards and improbable special effects… To film it, he decided to stay in the era, to approach the work head-on and in his mind as a kind of frightening and funny story to bedtime. […] Bergman lets us see how special effects work, he gives us a behind-the-scenes look at actors hurrying to meet landmarks and relaxing during intermission, and reminds us of the many other behind-the-scenes scenes in his films. We’re supposed to be aware of watching a performance, and yet, on some level, Bergman also wants Mozart’s fantasy to function as a story, an absurd tale, and it does. This has to be the most delightful movie ever made from an opera.”

Roger and I bonded, among other things, through our love of opera. In fact, our first date was at the Opéra Lyrique (“Tosca”), and I now sit on the board. Although our strongest emotions leaned towards more traditional performances, we also encouraged a reinvention of contemporary opera using the talents of current lyricists and creators. Roger would have applauded the presentation of “The Magic Flute” by the Opera Lyrique. I encourage the steps taken by Lyric to bring opera to a wider audience, including the Lyric Unlimited Committee, which has worked with neighborhood groups and schools in Chicago.