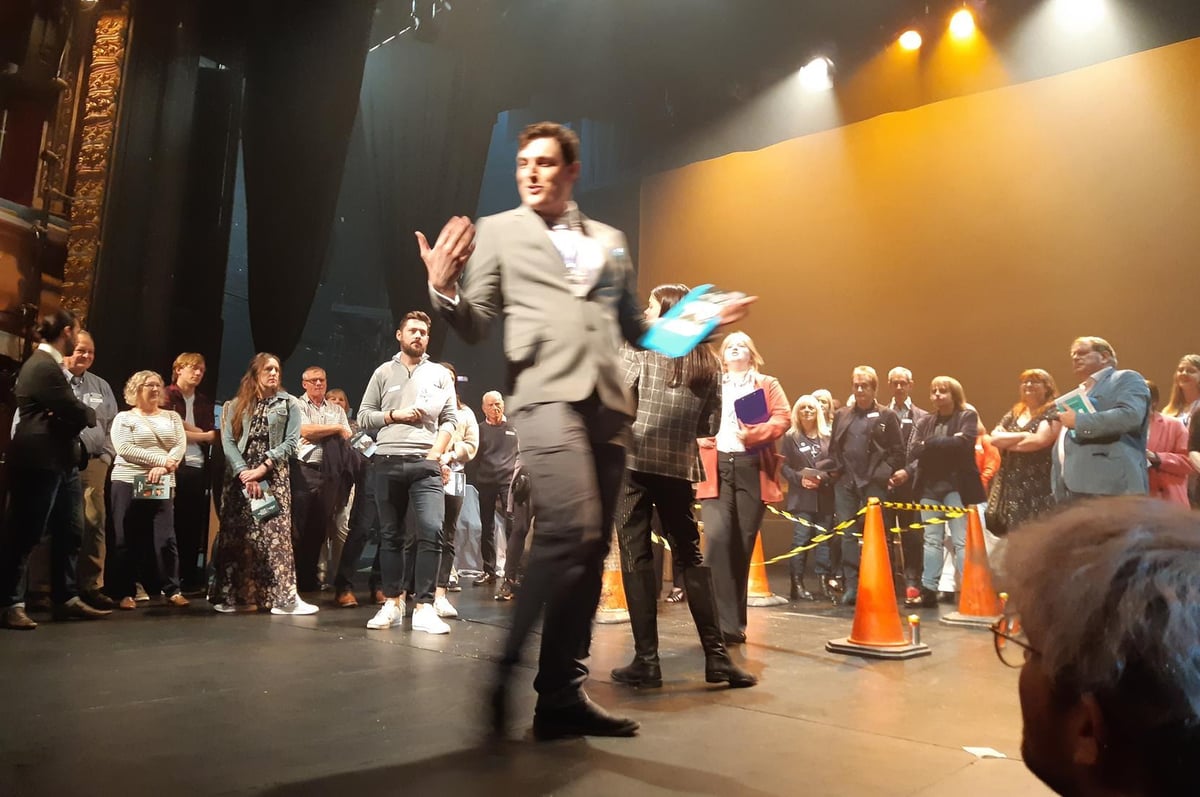 Harrogate Theater show of the year review: Why 122 Love Stories is a must-have crowd pleaser

And it’s true, the 21 community and professional actors deserve huge credit for the success of last night’s Thursday premiere of the Harrogate Theater sequel to last year’s epic Our Gate production.

It’s impossible to list them all but, if names are to be named, kudos to Ciara Daly (Shelley), Naail Ishaq (Damina), Matthew Weilding (Barty) and Alice Rowbottom (Daly).

An early scene from the opening night of the immersive play 122 Love Stories inside the Harrogate Theatre.

As good as the entire cast was, none of them overshadowed the main character of this hugely entertaining production – Harrogate Theater itself.

Although airier, funnier, shorter, and in some ways less ambitious than Our Gate, 122 Love Stories still offers substantial challenges for the talented cast and crew.

Instead of taking the production through the town center as the narrative unfolded, this time around they travel deep into the nooks and crannies of the charming but labyrinthine Grade II listed Harrogate Theater itself .

Part homage to its own long history and the art of putting on a show, part satire of the threat the world of money can potentially pose to the arts world, the upbeat script by Harrogate-based Rachael Halliwell , skillfully wraps all of the above with a light touch in a series of love stories inspired by real incidents in a theater steeped in heritage but wonderfully alive.

It starts with the Harrogate Theater being put up for sale, as advertised in a cleverly created estate agent brochure by the bogus ‘Selling Yorkshire Group’ describing the theater as ‘Harrogate’s central commercial property’.

A group of smartly dressed but heartless modern entrepreneurs haunt the auditorium amid dry ice and loud music – the lunatics have taken over the asylum as a hint of mayhem hits the Harrogate Theatre, albeit in a polite and well mannered manner.

Their aim is simple at first – to show the public around with the aim of persuading them to invest in a project to turn the Harrogate Theater into apartments or a nightclub or whatever it is, in fact, that will bring them a lot of money. ‘silver.

But soon sentiment begins to trump greed as cast and audience discover the hidden wonders of a theater that has witnessed thousands of acts of creativity, uplifting moments on stage and a myriad of minor personal drama behind the scenes.

In the narrow confines of the bowels of the stunning but Victorian Harrogate Theater building, pulling it all off in a freewheeling mix of storytelling, music and animation – and audience interaction – is no small feat.

A mixture of fun and emotion, the famous ghost Alice from the Harrogate Theater makes an appearance.

But nothing happens overnight – the only shock, if you want to call it that, is the last-minute “show must go on” heroism of artist and theater associate programmer Marcus Romer who stepped in to take inevitably relaying inmate director Amie Burns Walker who did such a brilliant job with Our Gate and, not to mention, The Great Gatsby.

Enchanting and thought-provoking and surprisingly relaxed for such a logistically complex production – hats off to producer Porl Cooper, stage manager Laura Burgess and set and costume designer Caitlin Mawhinney – no wonder the first performances of 122 Love Stories sold out.

Artists who first walked the floorboards of this grand old building when it opened in 1900 would surely have approved of this fabulous evening – or rather inside.

122 Love Stories runs at the Harrogate Theater until Saturday 30 July.