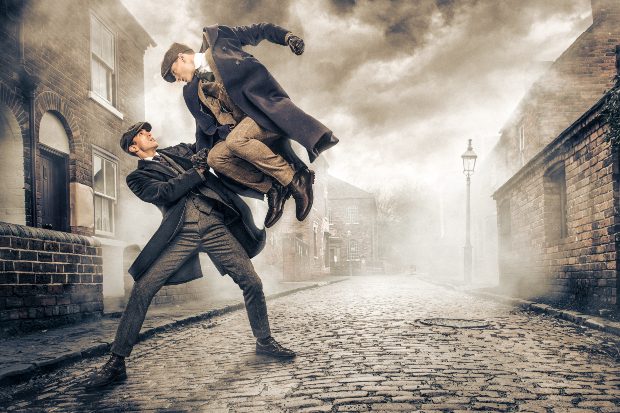 A first trailer has been released for Peaky Blinders: The Redemption of Thomas Shelby – an upcoming dance theater show based on the hit Birmingham gangster drama.

Written by series creator Steven Knight in collaboration with Rambert Production, Birmingham Hippodrome and The Lowry, production will pick up at the end of World War I and follow Tommy Shelby and Grace Burgess “through their passionate love story”.

The 60-second trailer gives audiences a taste of what’s to come from the series, with the familiar sound of Nick Cave’s Red Right Hand – you can check it out in full below.

The show will take place in Birmingham and London later this year before embarking on a UK tour in 2023, visiting cities across the country including Southampton, Edinburgh, Salford and Cardiff.

It features the 20 permanent members of the Rambert dance company on stage with a band playing specially commissioned music and opens with Tommy and the Peaky Blinders fight together in the trenches.

A fuller synopsis teases: “While Tommy builds his empire, Grace operates as an undercover agent for Special Branch in an effort to get closer to the heart of Tommy’s gang. As the story unfolds unfolds, many hearts are broken.”

It’s a great time to be a Peaky Blinders fan right now, with an official start date for the hit show’s sixth and final season having been confirmed earlier this week.

The show will return to BBC One at 9 p.m. Sunday, February 27, 2022with Cillian Murphy reprising her now iconic role of Tommy Shelby once again.

Meanwhile, Knight has already detailed plans to continue the story in a Peaky Blinders movie, though Murphy recently played down reports that the project is already moving forward.

You can buy tickets for Peaky Blinders: The Redemption of Thomas Shelby here and Peaky Blinders is available to stream on BBC iPlayer. Check out more of our drama coverage or visit our TV guide to see what’s on tonight.

The latest issue of Radio Times is on sale now – subscribe now to get every issue delivered to your door. For more on TV’s biggest stars,listen to the Radio Times podcast with Jane Garvey.