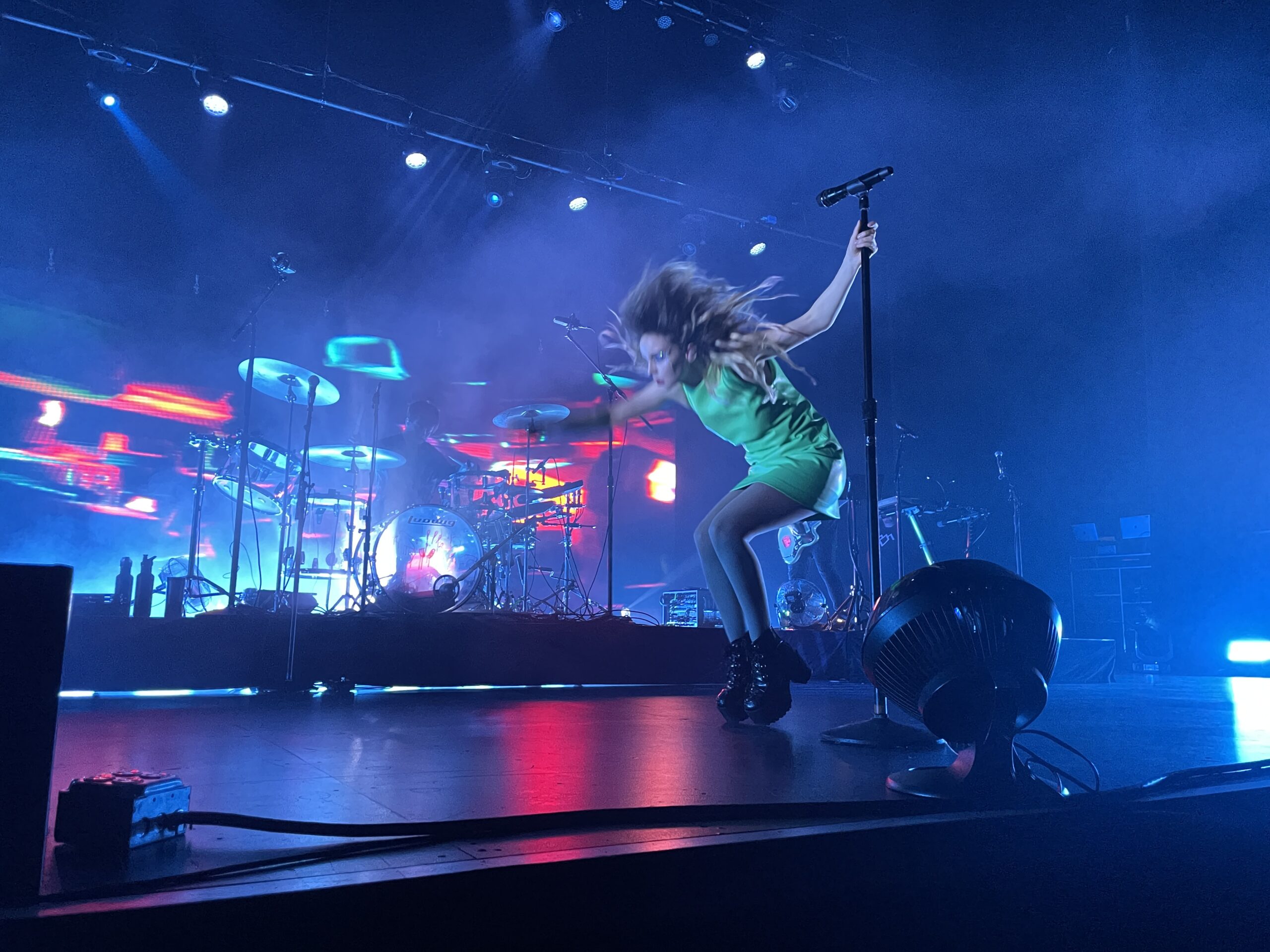 CHVRCHES recently performed their sold-out show at Seattle’s Paramount Theater on September 30 for an uplifting evening of upbeat dance pop songs in support of their Screen Violence album. The Seattle show came at the end of this fifty-plus date tour, which kicked off in their hometown of Glasgow, Scotland in March. Despite this, the quartet felt fresh, invigorated and eager to perform in front of nearly 3,000 eager fans.

Since their launch in early 2011, CHVRCHES has grown in an admirably intentional way, eschewing media that focused on anything beyond the band as a whole and steadily building a passionate fanbase on the strength of four scrapbooks. While each successive album has explored new territory, they also retain a fundamental electric energy, a synth-tinged pulse that sucks in the listener and demonstrates the band’s broad blend of fundamental influences. Indeed, Screen Violence features one of those influences personified, with the presence of The Cure frontman Robert Smith on “How Not to Drown” – a song that still resonated live despite Smith’s noticeable lack of vocals. .

Founding members Iain Cook, Martin Doherty and Lauren Mayberry are all multi-instrumentalists and it was amazing to watch Doherty and Cook, in particular, switch effortlessly from keyboard, guitar and bass as Mayberry danced from a side to side of the stage, twirling, singing and seeming to call the audience to join in his enthusiasm for the show. The group built a passionate following, a fact evidenced by the fervor with which the audience shouted, sang along to many songs, and danced energetically throughout the venue (despite the presence of seats in the mezzanine).

Their live set was always dynamic; the fog and lights were complemented by a wallpaper that provided a glowing background, alternating rectangles of pulsating pink neon or blurry static in different colors of red, blue, pink, green, and more. The screen and lighting provided the perfect backdrop of indefinable energy; it never detracted from the show but served to increase the verve with which the quartet performed.

However, in addition to the music, CHVRCHES is thoughtful and conscious techno-pop. Lead vocalist Mayberry showed humility and gratitude which could be attributed, at least in part, as part of the reason they were so successful; for example, late in the show, she commented on how amazing it was that people “still come to (their) shows after all these years to make music together”, and thanked the audience for giving that back possible. Naturally, this humility and clear passion for the connection between the audience and the performers just reinforces the bond that CHVRCHES audiences clearly feel with them.

As the show ended and people waited to leave the crowded room, this reviewer struck up conversations with some of the cheering fans standing nearby. One of them, 12-year-old Willa, was visibly delighted to have been in the front row where she was sure Mayberry had made eye contact with her on several occasions. In his words, “you could tell they were having a lot of fun on stage and the whole audience was giving them that incredible energy. You have to love what you do to be good on stage and they clearly did. The lights were perfect and Lauren’s costume changes (of which she did three) made the show really fun and cool. This jaded viewer struggled to find anything in it to disagree with; part of what made CHVRCHES the incredible band they have become is their unmistakable joie de vivre, their obvious and infectious love of performing. It will be fun to see where this passion takes them next; this review intends to stay along for the ride.