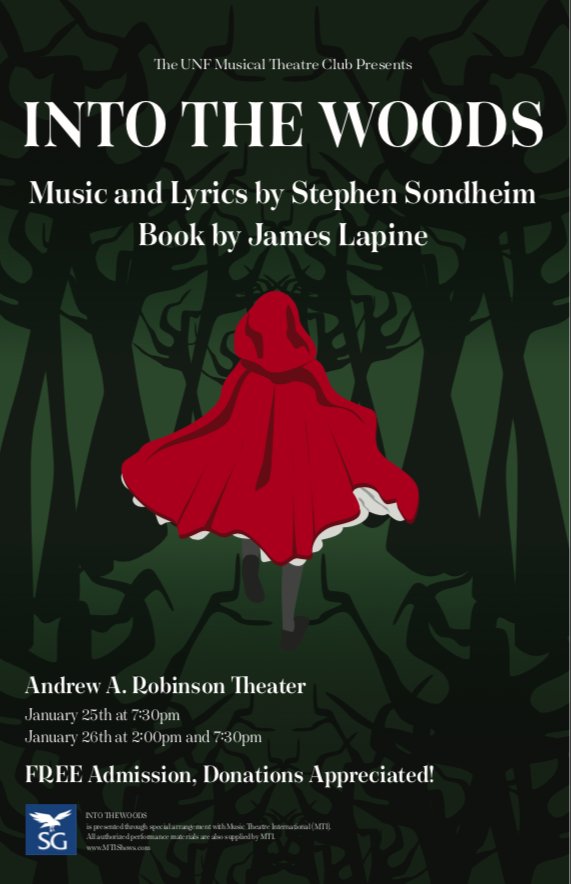 I sat among the packed house of lucky people who made it to the Andrew Robinson Theater for UNF Musical Theater Club’s “Into the Woods.”

With very little knowledge of the play itself outside of my short acting career in 7th grade year, when I myself played Rapunzel in my school’s own rendition, I was off to the show, excited but wary of the threat of being overshadowed by this actress’ portrayal of Rapunzel.

At the bottom of the note from the director of OspreyBill was a line that struck me and held me throughout the show. “It’s a story of wishes, tragedy and hope. I hope that you leave with at least one message: no one is alone. »

As the show began, first-time student director Brittany Nievinski spoke, welcoming the audience. She mentioned how working on a production creates a family environment.

Watching the show, the comfort that the actors display on stage shows that his words are true.

When the lights began to dim, a silence filled the theater. A a woman appeared in the right corner (left corner of the stage) with a dusty book. She blows the dust and opens it. The actors begin to move but there is no sound. Then, the whistle of the instruments, followed by the narrator (Gabrielle Burns) the most words often spoken throughout the evening, “once upon a time”, fill the theater.

With the whirl of her baton, conductor Kylie Copeland signals the orchestra of mine to play, and they do. With this, the characters begin to come to life while the orchestra narrates. Live music erupts from the hollow of the stage, showcasing detailed movements of each character.

Lighting Design Coordinator Joshua Turner knows what he’s doing when he comes to colors, giving each plot a different color to associate with. With five contradictory scenarios, changing lighting gives leeway to a piece of the puzzle. AT times more than one plot is shown on the stage, the lighting shows the color of each character on the background.

“Into the Woods” is a spin-off of the classic tales of the Brothers Grimm. Five Conflicts storylines continue throughout the play, including Rapunzel (Jade Marino), Little Red Riding Hood (Alyssa Billings), Cinderella (Jordan Leone), The Baker and his wife, and Jack (Alex Russo) and the Beanstalk. All the stories are interrelated, taking place in the same Kingdom and time.

During the first act, each character is on their own path, encountering other characters, but always with an end goal of their own. The Baker (Kyle Cohen) and his Wife (Samantha Powell), cursed with infertility by the witch (Emma Finnegan), carry on a journey into the woods to find the ingredients that will bring them a child. The witch’s enigma for fertility: the cow as white as milk, the cape as red as blood, the hair as yellow like corn, slippers as pure as gold. Along the way, the baker and his wife run into the other characters in the woods, tying the plots together. Need these items from the characters, but trying to help along the way, the baker and the woman describe the blurry line between right and wrong when it comes to being selfish.

From the second act, their ideology changes. With a giant on the loose, the group of townspeople must regroup.

Even though I spent two hours in the theatre, it felt like there was only a short moment in Woods. I was captivated by the performances of the students and their responses to the reaction of the audience. I left the theater with a sense of belonging, a spirit of never being alone.

For more information or topical advice, or if you see an error in this story or have any compliments or concerns, contact [email protected].